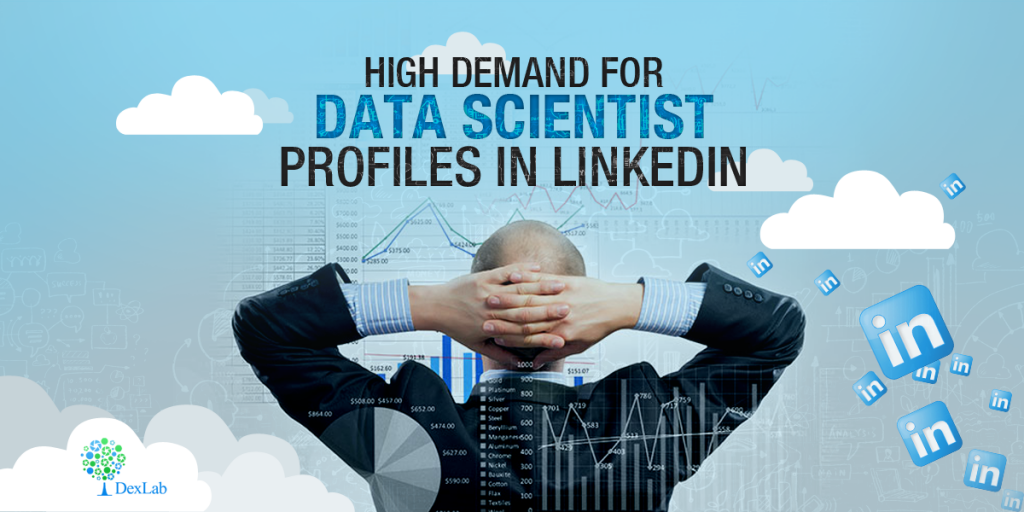 Currently, Data Science experts are the most sought candidates in the world. According to a research report published by DJ Metrics, the number of ‘Data Scientist’ profiles in LinkedIn has nearly doubled over the last few years. At present, there are more than 11,400 data scientists on the professional networking website, out of which, 52% have added the particular job description (read Data Scientist) during the period between 2012 and 2015.

DJ Metrics have taken into account 60,200 LinkedIn profiles of professional experts, while 27,700 records of Educational data and 254,000 records of skills sets were also used to conduct an analysis. Additionally, they have analysed the database of 6200 companies that have provided employment to the Data Scientists. The names of the Companies were collected by analysing the profiles of the Data professionals, since they have listed the names of their employers. 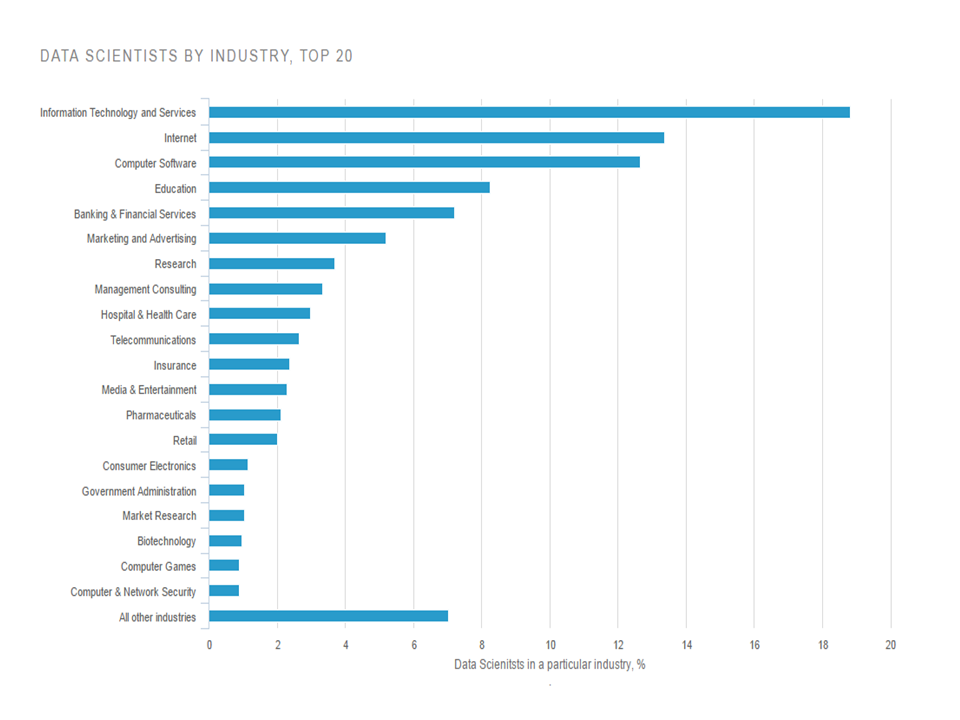 Researchers are forecasting that there will be a steady rise in the demand for trained Data Scientists, because of the increased adoption of Big Data and Business Intelligence by the leading global companies. High-end business organisations like Microsoft and Facebook are going through a continuous recruitment phase, as these companies had accelerated their hiring process by 151% and 39% respectively in 2014, as compared to what they had done in 2013.

According to the research report, about 65% of the total recruitments were carried out by the following industries: 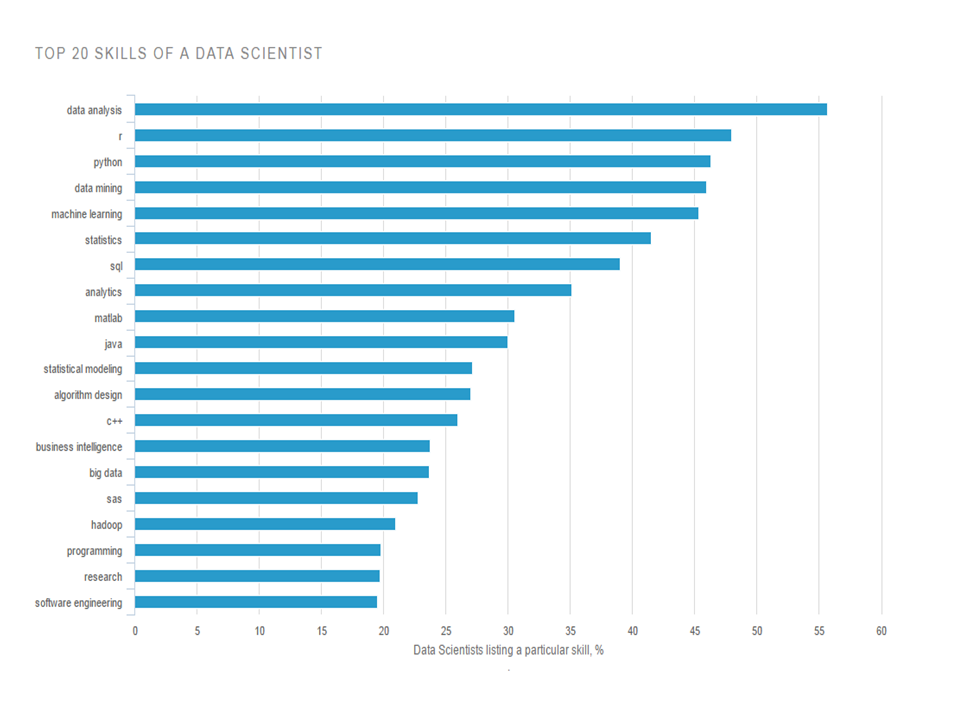 DJ Metrics has analysed the database of 254,000 skills in order to figure out the growth in the number of skilful Data Science professionals. The results are significant, as apart from the general ‘power’ skills; namely, Data Analysis, Analytics and Data Mining, the top skills found among the vast number of profiles included R, Python, Machine Learning, MATLAB, JAVA, Statistics and SQL. Surprisingly, the Chief Data Scientists are found to have the least technical skills, as only 27% of the profiles had listed Python, while 26% listed R as their technical skill sets. On the other hand, 52% and 53% Junior Data Scientists have listed Python and R, respectively. 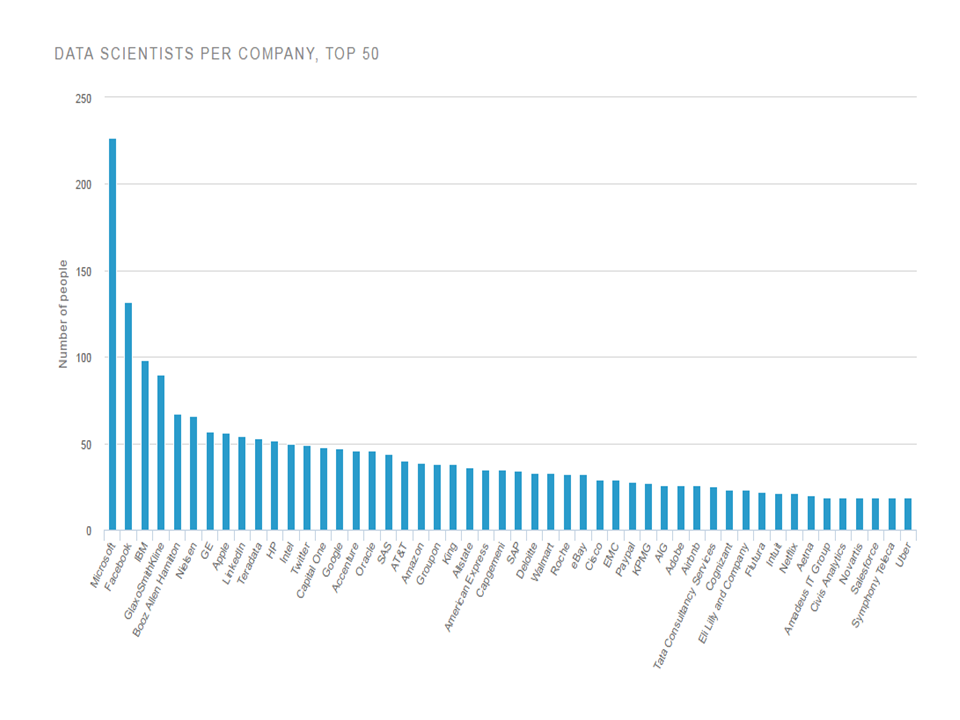 If you see the chart above, you will see that Microsoft and Facebook are the top recruiters over the given period. Surprisingly, Google has not made it to the top 10, although it has recruited quite a number of Data Science professionals. The reason may be that the Data Scientists at Google are called ‘Quantitative Analysts’, which is probably used by their employees while listing their designation on LinkedIn. Since, LinkedIn has researched about the general Data Scientists; they may not have detected the alternate titles. 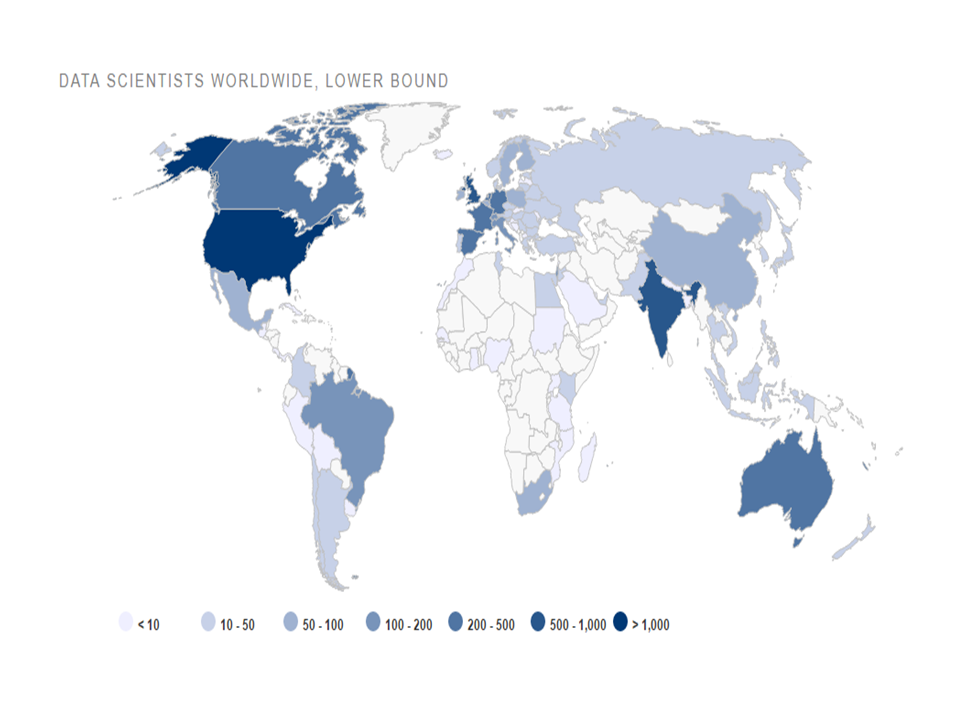 Almost 55% of the total Data Scientists in the world are currently located in the United States of America (USA), which makes the top of the list. The second country with maximum numbers of Data Science professionals is United Kingdom (UK), while the third position is occupied by India.

Are you interested in coveted data science online courses to upgrade your data science skill-set? Look no further than DexLab Analytics. They offer cutting edge Data Science training in Gurgaon for aspiring candidates.