Why Learning Python is Important for Data Scientists Today 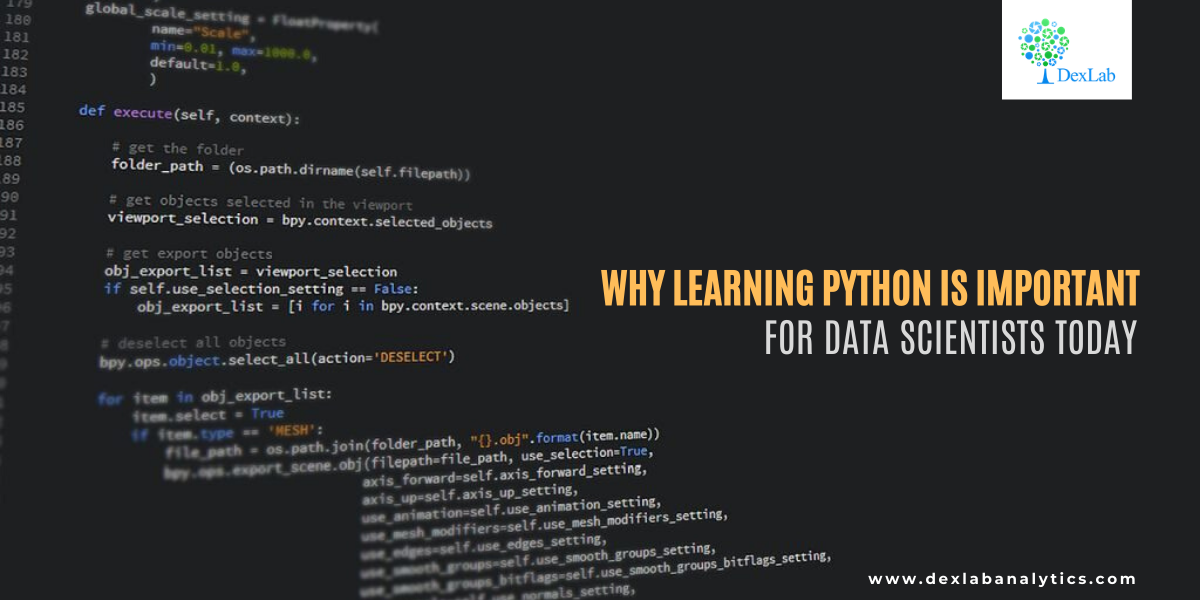 Data Science is the new rage and if you are looking to make a career, you might as well choose to become a data scientist. Data Scientists work with large sets of data to draw valuable insights that can be worked upon. Businesses rely on data scientists to sieve through tonnes of data and mine out crucial information that becomes the bedrock of business decisions in the future.

With the growth of AI, machine learning and predictive analytics, data science has come to be one of the favoured career choices in the world today. It is imperative for a data scientist to know one of more programming languages from any of those available – Java, R, Python, Scala or MATLAB.

However, Data Scientists prefer Python to other programming languages because of a number of reasons. Here we delve into some of them.

Python is one of the most popular programming languages used today. This dynamic language is easy to pick up and learn and is the best option for beginners. Secondly, it interfaces with complex high performance algorithms written in Fortran or C. It is also used for web development, data mining and scientific computing, among others.

Python solves most of the daily tasks a data scientist is expected to perform. “For data scientists who need to incorporate statistical code into production databases or integrate data with web-based applications, Python is often the ideal choice. It is also ideal for implementing algorithms, which is something that data scientists need to do often,” says a report.

Python has a number of very useful packages tailored for specific functions, including pandas, NumPy and SciPy. Data Scientists working on machine learning tasks find scikit-learn useful and Matplotlib is a perfect solution for graphical representation and data visualization in data science projects.

It is easy to grasp and that is why not only beginners but busy professionals also choose to learn Python for their data science needs. Compared to R, this programming language shows a sharper learning curve for most people choosing to learn it.

Unlike other programming languages, Python is highly scalable and perceptive to change. It is also faster than languages like MATLAB. It facilitates scale and gives data scientists multiple ways to approach a problem. This is one of the reasons why Youtube migrated to Python.

Python offers access to a wide range of data science and data analysis libraries. These include pandas, NumPy, SciPy, StatsModels, and scikit-learn. And Python will keep building on these and adding to these.  These libraries have made many hitherto unsolvable problems seem easy to crack for data scientists.

Python has a very robust community and many data science professionals are willing to create new data science libraries for Python users. The Python community is tight-knit one and very active when it comes to finding a solution. Programmers can connect with community members over the Internet and Codementor or Stack Overflow.

So, that is why data scientists tend to opt for Python over other programming languages. This article was brought to you by DexLab Analytics. DexLab Analytics is premiere data science training institute in Gurgaon.