Tigers will be safe in the hands of Big Data Analytics

Once again, good news is in the air for our very own ‘Big Cats’. The very recent reports on Tiger Census have proudly announced the incredible rise in the number from 1,706 to 2, 226 since 2010, when the counting started. 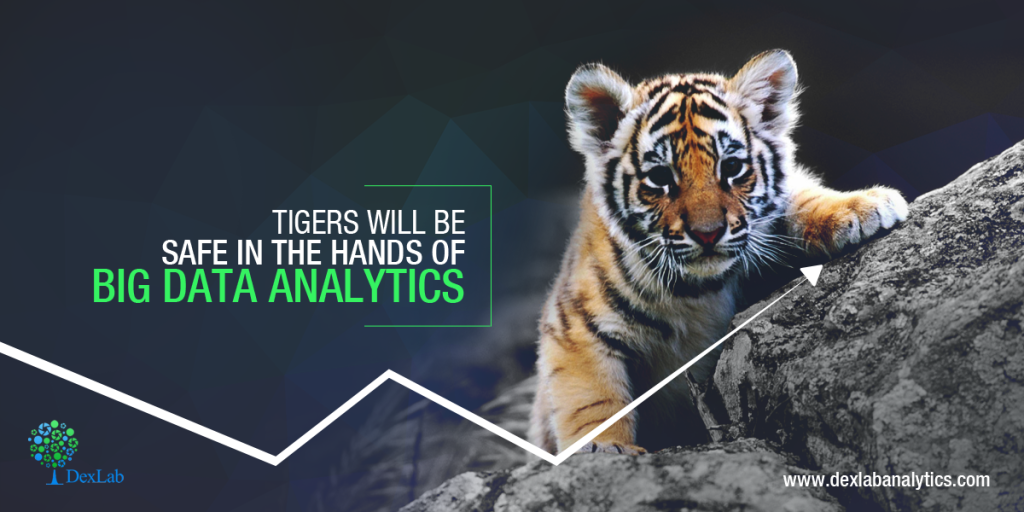 The previous years have seen the major downfall in the number owing to reasons like poaching, environmental degradation, dwindling habitats and of course man- nature conflict . But in contrast, the combined efforts put forwarded by local communities, conservationists and the Government has resulted in the upliftment, as stated by Marco Lambertini, Director General of WWF International.

This grand victory is actually the perfect instance of human effort in combination with the latest technologies like Big Data Analytics and Internet of things (IOT). Twenty First Century is well equipped with technologies like Wireless networks, Global Telecommunications Systems, Cloud computing, to name a few. These, coupled with GIS and animal tracking collars, have done wonders. A perfect usage of such technologies has definitely reduced human-wildlife clashes by linking mobile phones connecting to animal tracking, telemetry and perfectly working remote cameras of high resolution to prevent trafficking.

Big Data and Analytics- The best option is integrating with other forces to save Tigers.

Data provided by Satellite images and Camera captured photos and also aerial surveillance is definitely not the best means to detect the problem. Reports have stated that WWF for Nature staff has in store 2.5 million camera captured photos in 15 protected areas of rainforests all over the world. Making a report on such information is quite a laborious task. Thus, at this hour, a need is felt for big data Analytics to produce a quick report based on both organized and unorganized data. It is mainly used to reveal unknown patterns and correlations, leading to appropriate conclusions and results. Usage of Analytics also include data of regular usage reports uploaded in Social media and the contents found in the Social Sites and also the information acquired by placing sensors on animals.

The tarp camera equipped with self learning tools works in accordance to the situation when poachers differ from their strategies or places of poaching. They are thus, the main force behind the effective working of conservation ways of India.

According to TRAFFIC and WWF Wildlife expert Crawford Allan, emphasis must be placed on aerial surveillance and integrated work analytics. Reports have stated Illicit Wildlife trading generates a massive $10 billion a year, placing it on the top of the list followed by weapons, drugs and human trafficking.

Procedure of usage: This starts with the collection of raw data which is actually recording of an image of an animal recognized by a scientist. This includes multiple images of a   single animal coming in front of the camera. The raw data is then analyzed. Data found in every site is categorized into time periods (4-6 for each period), and with the help of algorithms and statistical models the presence of a specific animal is known. Then the analytic system reveals the presence of all the species in the coverage overnight. This information is relevant for park managers. Like, if he is suspecting absence of any species in his area, he can report to his higher official immediately.

“Such analyzed information also produces biodiversity information that is understandable to policymakers as well as people involved in conservation efforts. Consistent data collection by different groups increases the accuracy of results. This Big Data Analytics technology can be extended to other areas of conservation as well,” said Brajesh Sachan, Chief Technology Officer, Deskera.

Enroll in the big data certification course of DexLab Analytics and use your expertise in Big Data to save endangered animals.

Big honchos of the political arena are seen concerned about the failure in the attempts of the conservation policies. For instance, on November 8th, the US SECRETARY OF STATE Hillary Clinton, regarded that there is a dire need to put an immediate end to Illicit Wildlife Trafficking which is a major threat to foreign policy and security issues. Her opinion is perfect at this juncture where tigers, elephants, and rhinos are on the verge of extinction.

Thus, all the attempts must be placed at a unidirectional way.  Protection of the animals and of our habitat earth is necessary, so that our future generations can at least get a glimpse of the things we were about to end.